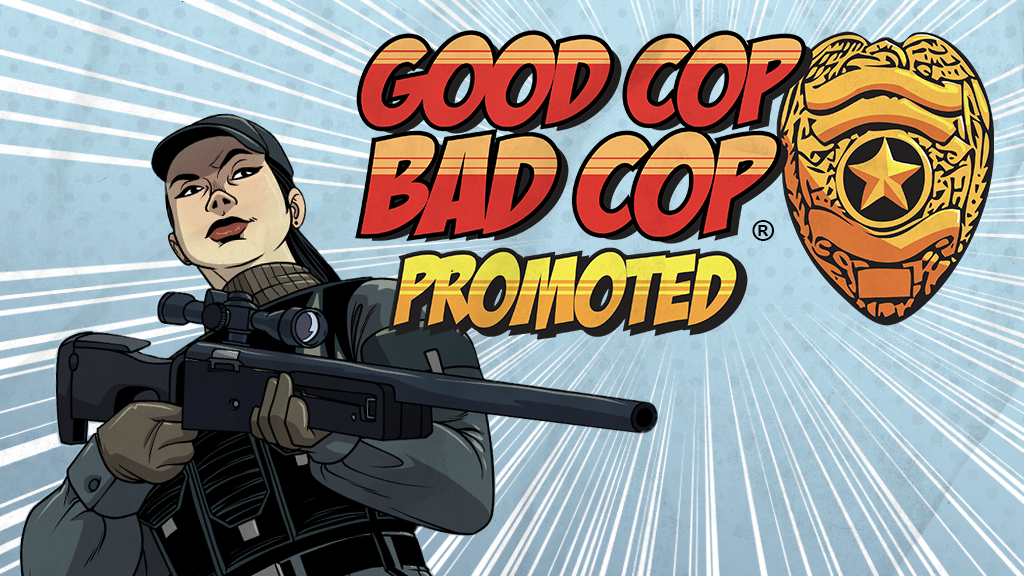 Created by PULL THE PIN GAMES

An expansion to Good Cop Bad Cop® where your cunning and heroics in one game get you promoted in the next.

Latest Updates from Our Project:

Today is the big 48 hour notice day so the main thing we wanted to get you in this Update is the list of items and prices for what will be offered in the BackerKit pledge manager so you can make your final decision on the best reward level for you.

If you investigated the campaign page or comments lately, I'm sure you noticed the new component stretch goal we promised was revealed to add a sleek bag for your medals to the DELUXE and ALL THE THINGS reward levels! For those of you who back at those levels, instead of spreading the medals out across the table and making sure none flip over to the point side, you can just draw them from a bag. It will be way easier. We're close to hitting that one

We found a clue that the next stretch goal will be some kind of component update....  I wonder what it will be!

In the image at the end of this section, you will find the items we plan to include in the BackerKit pledge manager and their expected prices. We are including it here because we know it could change your mind about the pledge level that is right for you and also so you can let us know through comments, messages, or emailing support@pullthepingames.com if there is something here that you were expecting/hoping to see that you do not so we can consider adding it.

We use the philosophy that, the earlier you're willing to commit your hard earned money, the more you get and the cheaper it will be. So if you back for the $14 reward level or higher during the campaign, you’ll get the lower price listed first. If you back at the No Reward or $1 level, you’ll have the same access to items, but they will be a little more expensive. If you wait to late pledge, you will have less access and prices will be significantly higher.

If you're more of a word person than a video person, Jonathan H. Liu from GeekDad wrote an article that gives an overview of the expansion and reflects on what it adds to the game. Jump down to the "A Few Thoughts on Good Cop Bad Cop: Promoted" section if you want to get into the "review" part. He is a veteran of GCBC so you can trust his perspective.

That's it for now!

It's time for boot camp! We have more resources to get you ready to earn your promotions and we'll announce the "winner" of the next stretch goal vote.

First off, we're excited to announce that backer Andreas Gabel took the initiative to create a Tabletop Simulator version of the base game of Good Cop Bad Cop and the Promoted expansion so you can get your friends together and play it yourself! It's very impressive with all the work being done for you automatically. It has all official images and the latest card text too. You can play it RIGHT HERE and consider it training for when your physical copy arrives.

The Next Stretch Goal Vote

With 96 votes in, it is literally exactly tied between New Component and Component Upgrade so we're going to let them share victory and make those the next two stretch goals. We'll flip a coin as to what comes first. We still have a week left, including the big 48 hour push, so we think we'll be able to reach both of them.

If you haven't seen the Unfiltered Gamer video, Michael is an expert on Good Cop Bad Cop and gives you an in-depth review of what he thought after playing. Jump to 7:43 if you want to skip the component overview and get straight to the review.

We're still finalizing the pledge manager so we'll give you the full menu in the next update. Post in the comments if you would join a Tabletop Simulator event where we play Promoted!

We're over halfway through and we're about to hit another stretch goal! Answer THIS 1-QUESTION SURVEY and tell us what you want to see next.

And just in case you need to gather more evidence, this update has a bunch of places you can learn more about the Promoted expansion.

If you only have a few spare minutes on your donut break and you’re still not sure how this expansion will work, Forrest Bower explains it all in under 5 minutes. Yep, he pretty much covers it.

And if you're unwinding after a long day on the beat and have a bit more time, the Hairy Game Lords posted a deeper dive yesterday -- but it's not an overview of the rules, it's more about the fresh reactions they had after playing it. You can really feel the joy they experienced getting back to playing games with real people after the quarantine. They also talk about some first-hand experiences using the new equipment and promotions so it's good stuff.

Our favorite master of puns, WEREDINO, posted the transcript of the interview he did with us last weekend right here. We got a little silly there but it will help you learn more about the game and the people behind it.

Finally, on Discord just before the WEREDINO interview, I talked to Brendan Mills, who also has a game that's live on Kickstarter called Stop the Train! It looks like you’re trying to complete your missions while thwarting the saboteur as you go and trying to stop the train before it’s too late. It sounds fascinating... and mysterious... and unique. That one has only a few days left if you want to check it out!

Much of the world is currently struggling to address long-standing, systemic racism. Recent events surrounding overuse of police force have cast a spotlight on this issue in the United States and, because our game features "good cops" and "bad cops,” we wanted to bring some awareness to the movement in this campaign. Since we believe awareness is one important part in addressing these problems, we wanted to take a moment to emphatically say that PULL THE PIN GAMES stands with the #BlackLivesMatter movement.

Individually, we are taking this time to listen, to learn, and to talk amongst ourselves about racism. The #BlackLivesMatter movement has led us to have valuable, difficult conversations about it with those that are close to us, and has caused us to become more aware of this racism in the world around us. Going forward, we will continue to seek opportunities to learn from the many voices in this movement that are far more important to hear than our own.

In this update, we have news about a live interview this weekend, we're asking for any rules lawyers to inspect the rules, and we're talkin' stretch goals.

Interview on Discord June 6th at 8am PDT

You may have seen WEREDINO sharing his positivity, puns, and love for this game in the comments of the campaign, and there’s more where that came from! He also does text/chat interviews of social deduction game creators in the Social Deduction Network channel on Discord -- and he’s going to interview us on Saturday, June 6th at 8am US Pacific Time. You can join us all there to watch it live using this link: https://discord.gg/NHRMphv

We’ll also post the transcript in a future update.

We will be moving quickly into manufacturing once the game completes, so if you have time to look through the 2 pages of rules to see if you can find any typos or things that are unclear, we'd be grateful.

Here are the base game rules if you need those too. We'll be doing a new print run of that along with this campaign so we could improve those rules if you have any suggested changes.

Although we're into the middle part of the campaign now (the "dead zone"), we're still making progress towards stretch goals every day. Right now, we're working on unlocking our 3rd card for the promotion pack that will be exclusive to backers for a limited time. We also achieved linen finish on all chipboard components and we'll have art on the Big Box insert! Plus, we still have 70% of our campaign left to go, so there will be plenty of time for more stretch goals over the next few weeks.

We hope to see you on Discord this weekend!